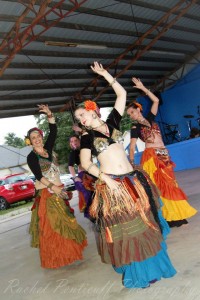 I’ve been belly dancing for half my life, so by this time I’ve had the opportunity to view a lot of belly dance performances. While I enjoy watching most of the styles out there, I’m particularly drawn to American Tribal Style® (or ATS) for a lot of reasons, some of which I’ve detailed here.

But while at a local belly dance event recently, viewing the various other dance styles in an evening performance, I realized yet another reason why ATS appeals to me: the micro structure of the dance mirrors and facilitates the macro structure of the dance. It works a lot like a fractal, if we extend the concept metaphorically a bit. Specifically, in ATS, if you don’t understand how the individual dance moves work, you won’t be able to perform in the improvised group structure.

If you’ve ever seen a dance group perform, and not just belly dance, there’s a good chance it was choreographed. As in, someone mapped out the moves in advance and everyone had to memorize when precisely to do what (and then practice… and practice… and practice). The concept of choreography includes individual dance movements (what a person’s body is doing in space, and to what timing) as well as the individual’s place in the formation or larger group.

As you might imagine, generating, learning, and rehearsing a choreography is a lot of work. But one interesting feature of this performance strategy is that there are points in it wherein the individual dancer’s body movements don’t matter that much. If the entire formation is static (nobody’s moving to a new position in the group at that moment), then a single dancer’s mistake or bad posture doesn’t ruin the show or mess everyone up. It might look bad, or at the very least inconsistent, but it won’t throw everything to a grinding halt.

In contrast, in ATS, every dancer must know how to execute every move accurately. This is because our group improvisational structure features a rotating “leader” (the dancer in view of everyone else who is responsible for cuing the next move) with one, two, or three followers. It’s a common practice to have the most confident dancers lead the most, and to let the less confident dancers follow more than they lead (since as ATS dancers learn quickly, competently cuing moves while leading is a whole separate skill set than just following the moves someone else cues). The less confident leaders can gain practice and experience leading in class, where it’s a low-pressure environment, and slowly begin to lead more in performances (which are more high-stakes than classes or rehearsals).

So let’s say the leader cues into a basic eight-count move in an ATS performance. If a follower misses the cue and arrives into the move a few counts later than the leader, that’s fine, it happens. If the follower totally misses the cue and doesn’t do the move at all, it might look weird, but that happens too sometimes. But when the leader decides to create a more complex formation than having everyone simultaneously facing the audience (such as a fade, or an inward-facing circle), if the follower doesn’t understand the basic movement structure, then the whole formation will fall apart. And it won’t be a “recover in 2 counts” thing, it’ll fragment and it won’t be pretty.

This is part of the reason I love teaching, practicing, and performing ATS: like a hologram, or fractal, or a crystal, understanding the micro structure of the dance facilitates understanding the macro structure of the dance. While in another belly dance style, say, cabaret, you could stick an individual into a four-person choreography who doesn’t know how to shimmy or step on the beat and have it not ruin the whole dance, in ATS that wouldn’t fly.

For these reasons, pulling off an ATS performance of even the most basic moves is very impressive! I’ll watch beginner ATS groups all day with a dreamy smile on my face. I love the more complex moves and complicated formations too, of course, but I remain in awe of all the work that goes into learning the basic moves, the formations to move in, and the difficult-to-articulate process by which dancers sync up with each other and learn to move together.

If you’re curious what this looks like, here’s an example of an ATS dance I performed with my troupe. Yep, it’s all improvised. We’d run the piece a number of times and performed it already twice in different cities. We knew who would lead which section, but other than that, which moves would be cued when was up to each leader. Maybe I’m biased but I think this performance came out well in part due to all the practice we put in, and in part because we have good rapport with one another.

I’m curious: are there other dance forms, or art forms more generally, that are fractal in the same that ATS is? Where learning the smallest component of technique is essential to practicing or understanding the larger concepts that flow outward from it?