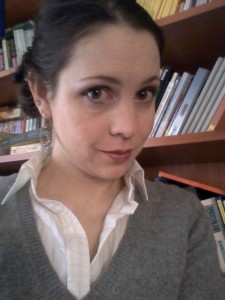 Dressed for the academic classroom, posed in front of my voluminous bookshelves.

I’ve had this website for a few years now, and the tagline at the top of the site has always been: “Jeana Jorgensen, PhD. Folklorist, Writer, Dancer.”

The three main words haven’t changed. I may not be seeking full-time employment in academia anymore, but I haven’t stopped being a folklore scholar. In fact, just last month I attended a small working symposium on digital trends in fairy-tale scholarship. I’m a little cranky (to put it mildly) in the general direction of academia right now… but being a folklorist is too ingrained into my identity for me to ever give up identifying as such. It influences how I understand the world around me, how I learn, and how I teach.

Similarly, I’ve been dancing for over half my life, and I plan to dance for the rest of it. I now direct a professional troupe, Indy Tribal, and I’ve learned tons from my students about trust and teaching. Dance is somewhere between a hobby that pays for itself (YAY) and an all-consuming passion, and as such it’s an essential part of my identity.

I’ve grappled more with the title of “writer” than the previous two. I’ve wanted to be a writer since I was in 4th grade, but I gave up writing fiction and poetry (my primary two loves) in favor of nailing nonfiction skills in grad school. And it worked. I wrote and published a lot. Recently, though, I’ve been getting back into the idea of writing more for pleasure, and returning to some of my early ideas about writing. But no matter what I’m writing, or for which audience, writing has been a constant in my life. I write for myself in the form of journals; I write for various blogs; I write endless to-do lists; I write scholarly articles. It’s a part of me at this point.

Now, however, I’m adding the tagline of (Sex) Educator to this website. I have a separate site devoted to my sex education work, but I want this site, which is my main web presence, to reflect that this is a part of my identity too.

See, I didn’t set out to become an educator of any sort, let alone a sex educator, but it’s evolved into a huge part of my identity, and it’s time I recognized that.

I’ve become a person who will have a conversation about rape culture with just about anyone, in the hopes that even though it’s an emotionally fatiguing topic, maybe someone will reach a new understanding of it. I’ve decided to keep adjuncting in large part because even though it’s exploitative labor, I love teaching too much to remove that venue from my life. I teach dance two and sometimes three nights a week, much to the consternation of my life partner and anyone else who likes to see me socially, because I just can’t get enough of it. I educate on gender and sexuality topics for little to no pay more than I should, not just because I’m still establishing myself in the field and am taking those pay-in-prestige opportunities for exposure (mixed bag because of undecutting, I know), but also because  this knowledge is too damn important to not be sharing at every chance.

This is why I’ve added “Educator” to the site tagline, with “Sex” in parentheses. I’m an educator who also happens to be a sex educator. I love making knowledge and concepts accessible and relevant… and I’m particularly good at unpacking the tangled mess of gender, sex, and sexuality, thanks in part to my upbringing. At one time, with only a few years of sex education blogging under my belt, I balked at calling myself a sex educator. Now? I embrace the title.

Anyway, I’m still deciding if I visually like the addition of (Sex) Educator to my website header, but I’m probably going to keep some version of it. It’s been neat reflecting on the process of getting here!