This Is Why I Perform

I love to perform for a number of reasons. I enjoy the challenge of coming up with new dance routines (I hesitate to say “choreographies” because I prefer improvisation to memorization); I like the rush of being on stage in front of people; and, yes, I dig the attention that I get when I perform. I can see the confidence and skills I gain from performing dance translating into other areas of my life, too: it makes me a better public speaker and teacher, among other things. And my ability to improvise in general, not just with movements, has improved as well. 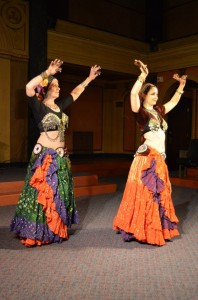 But there’s another reason I perform, a major one: I perform in order to reach out to people and demonstrate that anyone can dance.

This was brought home to me at a recent performance I did at a variety show as part of a convention. I had a little trouble reading the crowd, since they hadn’t been properly socialized on how to act as a belly dance audience (we love it when our audiences make a lot of noise – clapping, cheering, anything really!). So I did my best with my belly dance and hula hoop pieces, and smiled, and emoted, and generally had a good time. Enough people afterward complimented me that I figure it was just a quiet crowd, and it’s not like I horribly bombed or anything.

One woman came up to talk to me afterward, though, and said something that just about broke my heart. She said that as a child, she’d loved to dance while she was home alone. She’d turn off the TV, turn on the radio, and dance by herself for hours. But when her parents came home, they turned off the radio, turned the TV back on, and effectively prevented her from dancing any more. As she described this to me, she used the metaphor of a flower that wilts when it doesn’t get any sunlight. And she went on to say that she never danced much after that because she didn’t have the right body type, didn’t have money for classes, and so on.

I looked at her and said, “You can dance. Anyone can dance!” She expressed uncertainty about her age (40s or so), and I said that one of my collaborators has beautiful silver hair and is still dancing (she’s dancing with me in the picture at the top of this post). I gave her my card and told her to look me up, or get in touch so that I could recommend other teachers in the area for her.

It saddens me that people internalize the false message that they can’t dance because they don’t have the right body type, or because they didn’t start lessons early enough, or whatever. It’s not like I’ve been training in some conservatory since I was three years old – I just practice, a lot, because I prioritize dancing in my life. I don’t think I’ll ever be good enough to fully go pro, but that’s fine – again, I do it because I love it, and because I get something out of it, and because it helps me spread the message that anyone can try this and pick it up and enjoy it.

If someone decides to give dancing a try because they saw me performing, I’ll take that as the ultimate compliment. Don’t get me wrong, I love it when people praise my technique or costuming or anything along those lines – but to be an inspiration? Totally one of the best things ever.