Thoughts on Flow vs. Tech 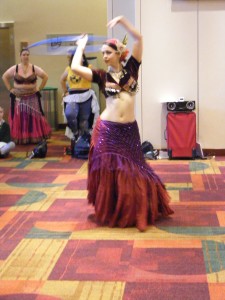 Me performing hoopdance at GenCon 2015. In this moment I’m more focused on flow than tech.

I’ve been struggling with finding my way in the flow arts since I began, roughly five years ago. This post is for both outsiders and insiders to this community, to explain two of the key concepts that permeate it, but are also found elsewhere in life and culture.

I define the flow arts as pursuits that are both creative and physical involving a combination of prop manipulation and dance. So, examples of the flow arts would be hula hooping, poi or staff spinning, juggling, and dancing with any of the above lit on fire. There are tons more props than I could list here, and there are about as many ways to engage with the flow arts as there are people who do it. Some folks use it as meditation, others as exercise. Some do it to perform, others teach, and still others do it at home for fun.

One of the concepts in the community that gets a lot of attention is the flow state. Richard Hartnell explains it beautifully in this video, but basically it’s a state of effortless engagement, where time melts away and you’re immersed in the experience. While practicing the flow arts provides an effective portal to the flow state, most people have experienced it while doing other things, such as cooking, playing an instrument, or any number of activities where you’re somewhat competent but also challenged.

We use “flow” to mean something else in the flow arts community: the experience of not only being in the flow state, but also engaging with your prop in a way that, well, flows. Flowing with your prop means dancing with it, playing with it, not pausing to redo a move you fumbled, because perfection isn’t the aim. Being in the flow is. Describing a flow artist as “flowy” or complimenting their “flow” is usually a positive thing. Flowy prop manipulation is beautiful to watch. I like this fire contact staff performance by Linda Farkas as an example of a flowy dance.

In contrast, we have the concept of “tech,” short for technique. Tech has connotations of endless drilling, trying to perfect a move or sequence or combo, going for things that incorporate ever-more-complicated planes and geometry. Describing someone’s prop manipulation as “techy” means that they’re at their top of their game when it comes to controlling their prop, or at least moving in that direction. It says little of their ability to dance or get in flow, though most well-rounded flow arts folks (or “flowks” as we’ll say colloquially) don’t just focus on tech in their training. As an example of a more tech-oriented performance, check out this fire contact staff routine by Aileen Lawlor.

I like to pair these performances when I teach about the flow arts in a college setting (as I did when teaching a class on Dance, Gender, and the Body a few semesters ago) because they involve the same exact prop, handled in very different ways. Both performers obviously incorporated both tech and flow; a performance that was all tech but no flow might be graceless and boring to watch, while a performance that was all flow but no tech would probably be based solely on the performer’s subjective experience, and maybe even clumsy.

In my home dance form, belly dance, we don’t use this terminology as much, but the ideas are there: some dancers focus more on technique and nailing individual moves, while others are more emotionally involved and expressive. As always, it’s about finding a balance, which is something I’m constantly working on.

There are a lot of ways to discuss flow and tech: as opposites, as the end points on a spectrum, as complementary aspects of the practice and drilling we all should be doing. I’ll wrap up this blog post here, as I wanted to lay the ground work for what I’ll discuss in my next post, about how this impacts my personal dance and performance practice.