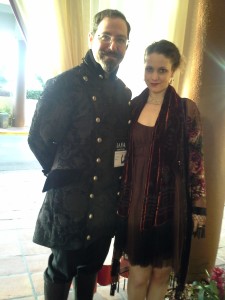 Me at the ICFA Banquet with my dear friend Austin Sirkin.

As most people who know me know by now, ICFA (the annual meeting of the International Association of the Fantastic in the Arts) is one of my all-time favorite conferences. I get to present on and learn about cutting-edge fairy-tale scholarship, as well as overlapping areas like fantasy literature, children’s literature, science fiction, fan culture, and so on. I get to see some of my favorite people, scholars and writers and artists alike. I get to regale people with stories and meet really amazing writers who have thoughtful things to say about folklore. And since it’s in Orlando, I get to enjoy some nice weather and also meet up with some of my family members who are in the area.

Last year, I came out as post-ac at ICFA, which went far better than I could’ve hoped. This year, I continued that trend of engaging people in conversations about adjunct activism and awareness, and being quite open about my new career as a sex educator. I even got to dispense some relationship advice, and talk about how ideas from the history of sex education are relevant to everything from Twilight to other vampire fiction to speculative fiction set in World War I! People flocked to see my paper (despite the early morning slot it was in) and requested a copy if they couldn’t make it, so that helped me feel validated as a scholar still, even if I’m not doing scholarship full-time or trying for a full-time academic job. I guess it helps that I’m researching the sexy TV show Lost Girl!

One of the other notable things that happened at ICFA was  the huge amount of scholarly compersion I experienced. I’ve written about compersion before – the feelings of happiness we can experience when our partners/lovers/loved ones are happy by someone else’s doing – and I think it applies here.

So while my list of things that I enjoyed at ICFA in the above paragraphs may sound very self-congratulatory, fear not, I was also very moved by the successes and joys of my colleagues. I got to witness and be a part of the inception of a new group devoted to Fairy Tales and Folk Narratives, which is a major step forward for our interdisciplinary bunch of scholars. I got to cheer on colleagues who are going to play a major role in next year’s ICFA specifically dedicated to Wonder Tales. I got to introduce people working on similar themes – say, disability studies – in disparate textual fields like science fiction and fairy tales. That connection might’ve happened without me, but I still felt great about having the social contacts to make sure that scholars who should know each other’s work will from now on.

These reminders of other people’s joys and successes that have nothing to do with me are always a pleasure. Even though academia is largely run on a limited-good model wherein we must compete for increasingly dwindling resources, it’s still possible to be happy for each other when these successes occur. Perhaps it’s even easier from a vantage point on the margins, when I’m less affected by the drama and politics of being invested at the full-time level. Another reminder as to the importance of context, eh?

While this may not be the most polished blog post ever, I wanted to make sure to get my thoughts written out and shared while I’m still feeling the post-conference glow. The addition of compersion to my normal maelstrom of conference feels – elation, intellectual stimulation, despondence when it’s over – is a welcome one, furthering the alchemy that makes ICFA the amazing experience that it is.