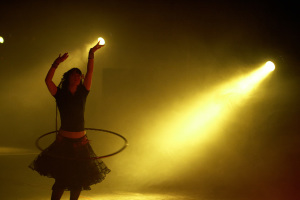 Me doing hoopdance at Snow Flow Fest in 2011.

Sometimes my body reminds me that I inhabit it in ways that cut and sting. We’re all residents of our bodies, and while I reject mind-body dualism, sometimes I go far too long without encountering my own bodily limits. When I push and extend myself to the point of almost breaking, my body sharply reels me back, and occasionally this is a prompt for shame.

Shame is such a stealthy emotion: it often disguises itself as something else, and resists attempts at investigation. We all experience shame differently, too. It can feel like a vise squeezing my heart, or a fog dimming my vision and dampening my head. When I feel shame in my body, I know I’m onto something, something real, something that nestles in my heart and needs to be recognized.

I was at a hoopdance workshop recently, and came face-to-face with shame that I didn’t even realize I had. The workshop was definitely a safe space, not at all judgmental or competitive, and the instructor and fellow participants did a wonderful job of making sure everyone felt equally valued and competent. Perhaps that safe space contributed to my breakdown.

We were learning a trick that involved balancing the hoop on the back of the hands. I don’t normally have that kind of technique in my repertoire, but I thought I’d given it a shot.

I forgot about my recent eczema diagnosis. The skin on the backs of my hands, especially around my knuckles, is prone to cracking and bleeding. I’ve got a steroid cream and a barrier cream, and they’re both helping. I wear gloves to wash dishes and try to avoid labor that involves gripping things with enough intensity that it’s like making a fist. This seems to be a chronic condition, so I’m still making changes to accommodate it.

When I first tried the hoop trick, I sorta got it. When the surprise wore off, the pain crept in. My hands hurt. They weren’t bleeding yet, but the more I tossed and caught my hoop on the back of my hands, the more intense the pain became.

Now, I’m no stranger to pain. I’ve run a marathon. I rock climb. I have tattoos and piercings. I don’t really enjoy pain, but I can take it.

Still, this hurt. And the more it hurt, the more I became convinced that there was something wrong with me. After all, I was standing in a circle of two dozen other hoopers of varying levels and they were all getting it. Why couldn’t I?

Tears welled up. I did the responsible thing and excused myself to sit down and stretch a bit, since I didn’t want to cause a scene (though in all likelihood, any of these lovely folks would’ve been happy to take a few minutes to talk to me about how I was feeling). Tears kept coming. So I walked to the bathroom, and sobbed for about ten minutes straight.

While crying, I realized that the pain in my hands was fading, but the tears kept coming. That was my entry point into realizing that this was about more than pain: the pain was a gateway to shame.

I’ve always been competent at lots of things, especially in the dance world. If there’s something I don’t get, I’m usually pretty certain that I’ll learn it eventually. Especially in hooping – which is less of a priority for me than belly dancing – I tend to be pretty chill when it comes to learning new tricks. I know it’s fairly unlikely that I’ll go pro, so I’m in no rush to Master All The Things (if such were even possible!). This mentality – enjoying the process, lingering in the headspace of a beginner – has been very helpful for me in quelling my inner competitive side who is annoyingly perfectionistic.

But here, I ran into something ugly inside myself: shame that wells up from colliding with something that I physically cannot do. Shame at not being able to learn something, when I’ve made a lifelong vocation of being a dedicated learner and teacher. And there was really nothing I could do about it. I mean, I could keep trying to learn the move, and make myself bleed in the process. But that obviously wasn’t a good idea. Even in my pain-addled teary state I could tell that much.

So I sat with the pain, eventually stopped crying, dried off the tears (and mentally thanked myself for buying the high-end makeup that doesn’t smear or run as easily), and returned to the workshop. We moved on to working on other aspects of hoopdance, and I was able to continue participating.

Even though I didn’t learn what I set out to learn during that portion of the workshop, I still learned something: that I carry around this shame inside myself, like a poison seed or parasite. There’s no rational reason to feel like I’m a failure if there are things I can’t do, and I suppose this is something that many people learn in more immediate, raw ways. Bleeding hands ranks pretty low on the list of life-altering disabilities, after all.

And I should clarify: I’m not writing this to shame that workshop instructor for selecting things to teach that aren’t accessible to everyone. I’m pretty clearly an outlier in this regard, since most people’s hands don’t bleed upon contact. I’m not saying that anyone should’ve handled anything differently, or noticed my absence and immediately rushed to soothe me.

In one way, this post is me oversharing as a political and personal act. But it’s also me affirming that shame affects many, many people, and that shame can manifest in embodied ways, perhaps triggered by physical pain. My shame about inability is both unique to me and common in that many people experience shame for many reasons.

Shame can be isolating, and that’s a major cause for me to write about it publicly and acknowledge that experiencing it doesn’t make me a bad person, or an unworthy one, or a weak one. Hopefully other people can reach similar realizations about shame, pain, and their value as human beings.