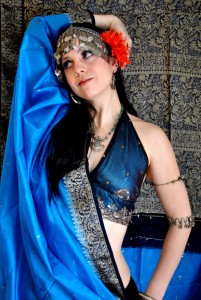 Me, a “white” belly dancer      Photo by Curtis Claspell

By now there’s been a fair bit of comment on that infamous Salon post, Why I Can’t Stand White Belly Dancers, but I thought I would add my perspective as a folklorist and a (white-ish-I-guess) belly dancer.

One of my first reactions was along the lines of: um, are there no “white” people in the Middle East? How are we defining whiteness? Do Jews (which would include my ancestors) count? This response by Yessenia emphasizes the arbitrariness of ethnic categories, pointing out that a lot of well-known belly dancers might look like white impostors, but they’re actually of Lebanese, Egyptian, or Turkish descent.

As a folklorist, and as someone who’s actually done some research on the history of belly dancing, I know that this form of expressive culture – like many others – is transnational. Cultures have always come into contact and have always exchanged folklore, whether stories or dances or foods. This isn’t to say that there’s no power imbalance in the exchange (there usually is), but rather that this phenomenon is as old as humanity itself.

The ridiculousness of saying “X ethnicity shouldn’t practice Y art form” has already been mocked in The Washington Post. Besides, there have been Western influences on belly dance, so it’s sorta ours too. As Nazneen points out in her blog post A “brown” dancer responds to “Why I can’t stand white belly dancers,” contemporary belly dance “was shaped by Mahmoud Reda, an Egyptian dancer who popularized Egyptian folk dance for the stage by blending it with Western ballet. (Interestingly, he was inspired by the likes of Gene Kelly and Fred Astaire, by his own admission).” Determining the true origin of an expressive culture form is a knotty problem, as folklorists know, so I always like to remind people of how complex these questions are.

And the origins of belly dance are pretty complex. Quoted in The Atlantic, Dr. Ruth Webb, an expert in performance during antiquity, states: “with regional variations, something like Raqs Sharqi seems to have been known throughout the Mediterranean and certainly flourished in Egypt and the Eastern Mediterranean before the arrival of the Arabs in the 7th century.” Very old. Multiethnic (even pre-Arab, by some accounts). You get the idea.

And yet because of the Salon author’s focus on essentializing and universalizing race/ethnicity, she misses a valuable opportunity to critique the colonialist, imperialist, and orientalist problems with belly dance in both the East and the West. Autumn Ward’s response to the piece cogently points out: “For Egyptian women from the Muslim Arab cultural majority, dance is simply not a respectable profession, so dancing professionally is not an option. This is a firmly entrenched cultural attitude that predates current conservative politics by centuries.” In other words, Egyptian society has made it unacceptable for women (and in many cases, men – read some Anthony Shay!) to take up belly dancing without being accused of also being a sex worker. This is a problem of local politics/beliefs, but then outsiders are blamed for wanting to perform a dance because they aren’t held to the same standards? Hm. This is my skeptical face.

G. Willow Wilson also points out some of the political implications of Westerners borrowing belly dance when she writes: “When you shimmy around a stage in a hip band and call yourself Aliya Selim and receive praise and encouragement, while the real Aliya Selims are shortening their names to Ally and wondering if their accent is too strong to land that job interview, if the boss will look askance at their headscarf, if the kids at school are going to make fun of their children, guess what: you are exercising considerable privilege.” There is a hostile, anti-Arab, anti-Muslim sentiment in many parts of the West right now, and belly dancers should be informed and possibly even active about these topics, just as we educate ourselves about the cultures framing the dance when it’s performed “over there.”

On the whole, I agree with professional dancer and Middle Eastern scholar Asharah‘s take in her essay, I’m A White Woman and I Belly Dance, in which she writes:

Bingo. As artists and world citizens, we ought to be open to discussions about the political implications of cultural borrowings. But as belly dancer and artist Tempest writes in her post Nobody’s Right If Everybody’s Wrong, what tends to happen in these discussions is people stating, “it doesn’t matter who you are/where you come from/what you say/how you say it: you are wrong, so shut up. Which doesn’t empower or help anyone.”

I agree that there does need to be room to address the grievances raised in this debate, and obviously it’s not my place to tell someone that they’re wrong to be offended and that their feelings aren’t valid. As far as how to productively have that kind of conversation, well, that’s coming up in Part 2!